Silvia Martinez stands out in a crowd, with her radiant smile and vibrant clothing. She draws you in with her warm personality, then wins you over completely with her cooking.

My visit to her Morro Bay home stemmed from her upcoming appearance on PBS’s The Great American Recipe, a cooking competition that will showcase 10 home chefs’ multicultural cuisine.

Inspired by diverse backgrounds, the contestants will showcase their signature dishes, with Martinez sharing recipes from her popular food blog Mamá Latina Tips.

Martinez said appearing on the show, premiering June 24, “is one of the highlights of my life because the show allowed me to share some of my food and culture with the world, and I met amazing people who will be part of my life forever.”

“I was a little worried before I arrived [on set in Virginia] because there were so many unknowns,” she admitted. “However, as soon as we all met, I realized that most of us had the same worries, and the stress of the unknowns rapidly went away.”

“Alejandra Ramos was fantastic,” Martinez said. “She always had a smile on her face, and that made us feel relaxed and happy. She was truly excited about our food and our stories.”

Ramos said as the host she can’t play favorites, but Martinez left a lasting impression on her as well.

“I truly loved every moment I got to interact with Silvia on the show,” Ramos said. “She radiated warmth and joy in every interaction, and her food was exquisite.

“She was always so enthusiastic and approached all the challenges with the perfect mix of heart, creativity, and skill, while also being a great support system to the other competitors,” Ramos said.

“I also really admired her openness and vulnerability in sharing her stories with all of us. I know the viewers are going to love her just as much as we all did.”

“Foo and I arrived in Virginia on the same plane, so we shared a car to the hotel,” she said. “I always enjoy our conversations very much. He is hilariously funny.”

In addition to being an amateur chef, Nguyen is a stand-up comedian.

“My passion for recipes and dishes stems from my mom’s ability to lovingly feed a family of 10—five daughters, three sons, and a husband,” he said.

“I relish with astonishment knowing that celebrated chefs I admired tasted a part of my mom’s love on a dish,” he added, referring to the show’s renowned panel of judges—Leah Cohen, Tiffany Derry, and Graham Elliot.

Nguyen said he also enjoyed his time and experience with fellow cast members and especially clicked with Martinez.

“Silvia was a beacon of ease and comfort in a culinary confinement of chaos,” he teased.

In all seriousness though, he added, “I very much look forward to sharing many meals with our families as we journey through life’s kitchen.”

The show is different from traditional cooking productions, with camaraderie favored over competition. Contestants will prepare two dishes per episode, and share personal stories reflecting the inspiration for their recipes.

At the conclusion of the series, the finalists will create an entire meal for the judges, who will crown their choice for America’s top home chef. The winner will be featured on the cover of The Great American Cookbook, which will include recipes from all 10 contestants, as well as the host and judges.

The show’s melting pot of culinary styles will feature everything from Puerto Rican and Southern soul food to European and Asian dishes.

Martinez will spotlight beloved family recipes passed down from her mother and grandmother.

Born and raised in the state of Guanajuato in central Mexico, Martinez graduated from the University of Guanajuato’s College of Industrial Relations and embarked on a successful career in human resources and teaching.

“For seven years I was in charge of the training program for executive personnel for all the University of Guanajuato campuses throughout the state,” she said. “Also, I did an MBA and became a university instructor in industrial relations.”

The couple embarked on a new journey, moving to California in 2001, and ultimately settling in Morro Bay.

Not one to be idle, Martinez capitalized on her Spanish language skills and cooking experience—honed since the age of 12 in her family’s kitchen—and started a blog in 2009 to connect with other Latinos on the Central Coast.

The website and associated social media accounts have exploded to include nearly 1,000 recipes—primarily her own—in English and Spanish, dozens of advertisers and sponsors, and thousands of followers from around the world.

The first recipe posted on her blog was her favorite dish, green pozole with chicken. 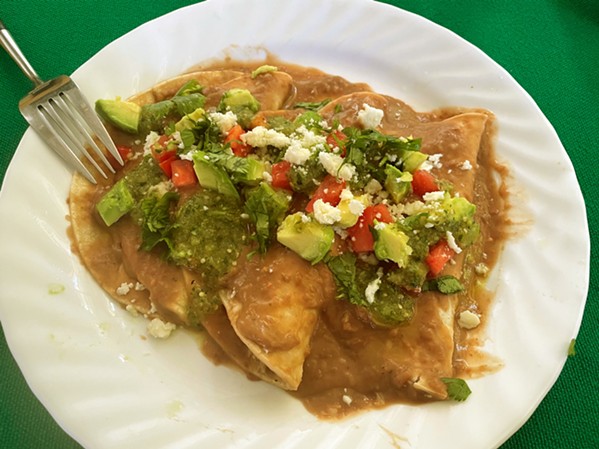 “This is a recipe handed down from my mom, and in Mexico, we usually serve it on special occasions like baptisms, birthdays, etc., keeping in mind that those celebrations happen often in Mexico with such a large extended family.

“Since I live far away from so many of my family, pozole verde makes me feel closer to them.”

The popular pozole recipe boasts tens of thousands of shares on her website.

However, while visiting Martinez’s home in May, she treated me to another staple of Mexican cuisine, enfrijoladas, which translates to “in beans.”

Her family eats variations of the dish several times a week, as they are healthy, inexpensive, and easy to prepare, she said.

They are also delicious.

While I was enjoying them, I couldn’t help but wonder if I was in the kitchen of America’s top home chef. Filming has concluded, and the winner has already been selected, but the contestants are sworn to secrecy.

Peel and clean the tomatillos. Wash the chiles and cut the stems off. Place the tomatillos and chiles in a pot and cover with water. Bring to a boil and cook for about 10 minutes (until tomatillos change in color from bright green to olive green). Let them rest to cool, then strain but keep liquid and set aside. In a blender combine tomatillos, chiles, onion, cilantro, and salt. Mix, then taste for salt and consistency. If it’s too thick, add some of the liquid you set aside. Serve with chips or on top of anything! Δ